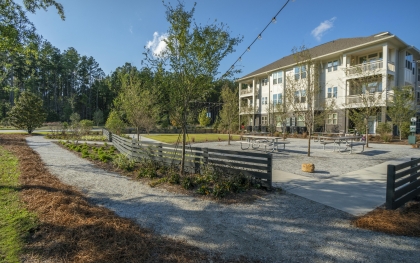 American Landmark Apartments (American Landmark), one of the fastest-growing multifamily owner-operators in the country, has acquired Alta Brighton Park, a 329-unit community in the Nexton community of Summerville, South Carolina, just north of Charleston. The project will undergo an $800,000 capital improvements program and will be renamed Elevate at Brighton Park.

The acquisition marks the second property in American Landmark’s South Carolina portfolio, with the firm growing its presence in the Charleston area. The company currently owns and manages approximately 28,000 apartments throughout the Southeast and Texas, and is continuously closer to its goal of adding $2 billion in assets to its multifamily portfolio this year.

“The Summerville-Charleston MSA has shown favorable fundamentals conducive to future growth in demand for housing, particularly with labor expansion in the hospitality and tourism sector as well as the Mercedes-Benz Sprinter van plant that opened last year in North Charleston, which is expected to reach 1,300 workers,” said Christine DeFilippis, Chief Investment Officer of American Landmark. “With an unemployment rate of 2.5 percent that’s well below the 3.7 percent national average, Charleston remains just as important to our strategy ever since our initial entry to the area one year ago.”

Alta Brighton Park is found within the burgeoning master-planned community of Nexton, a 5,000-acre development positioned to become the region’s new residential and employment center. Spanning the size of the Charleston peninsula, recent investments including a car manufacturing operation by Volvo as well as office, housing and retail sites that are expected to raise the area’s population by approximately 16,000 to 20,000 new residents.