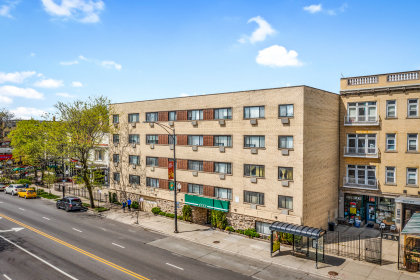 Becovic, a Chicago-based multifamily owner and operator, has acquired 6758 N. Sheridan in Chicago, Illinois for $9.8 million. The deal was brokered by Kiser Group’s Advisors Rick Ofman and Danny Logarakis. Kiser Group represented both the seller, The Vranas Family Trust, and Becovic in the transaction.

“Investor interest in Rogers Park multifamily continues to rise. We had 38 tours, resulting in multiple competitive offers,” said Ofman. “It’s no surprise that more than 800 multifamily units in the neighborhood have changed hands so far this year.”

Originally built in 1974, 6758 N. Sheridan is a 73-unit 4+1 apartment building located on the east side of Chicago’s Rogers Park neighborhood. The building has 29 studio apartments and 44 one-bedroom units.”

“For decades, the seller had kept this building well-maintained,” said Logarakis. “When marketing this property, we conducted more than 30 tours and received nine offers. The value-add potential, as well as the Loyola University location of the building, was very appealing to potential investors.”

“We are big believers in Rogers Park,” said Sal Becovic, President at Becovic. “We are excited about the addition of The Sheridan Pratt at 6758 N. Sheridan to our communities and look forward to serving its residents.”

“During the 2nd and 3rd quarters of this year, we have experienced a tidal wave of multifamily investor activity throughout the Chicagoland area, as capital pent up during the pandemic began free-flowing back into the markets,” said Lee Kiser, Principal and Managing Broker of Kiser Group. “Rick and Danny did a great job corralling that activity for a successful marketing campaign.”