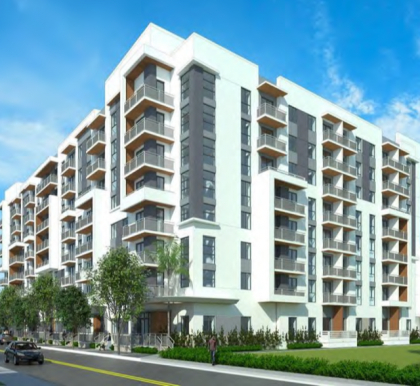 The Kavista will feature 282 rental units on a two-acre site at 495 NE 83rd St. The project will offer a mix of one, - two,- and three-bedroom units, ground-floor workspaces and 351 parking spaces.  Amenities will include a pool deck, fitness center, media room and barbecue area.

“This transaction is an opportunity to work with a development group that has an excellent reputation and track record building quality projects in Miami,” Jacobson said. “There is no doubt their newest project, The Kavista, will be a welcomed addition to the area and provide much-needed housing to accommodate an influx of new residents that are moving in every day.”

The Barrington Brothers, LLC is a family-owned and operated company that seeks opportunistic real estate investments throughout South Florida. Its portfolio of successful Miami projects includes the Corridor East, West and South apartment communities in the city’s Upper East Side neighborhood and a boutique rental building in Little Havana.

El Portal’s name is derived from the Spanish term for “the gate,” in homage of two wooden gates that previously stood as a village entrance. The village is an appealing enclave for residents who enjoys its privacy and beautiful wildlife. El Portal is a bird sanctuary and haven for Florida’s endangered manatees.

“Trez Capital provided a seamless execution on the construction financing for The Kavista,” Rose said. “We are grateful to be part of the team assisting the Barringtons in their continued pursuit to provide this thriving community with attainable luxury multifamily units.”

For Trez Capital, this recent deal represents another opportunity to fund a development in an emerging market outside of the city core.  In October 2021, Jacobson originated a $78 million construction loan for The Julia, a Neology Life project under construction in Miami’s Allapattah neighborhood.  In July 2021, Trez Capital funded a $64.7 million loan to build The Elevate, a 293-unit midrise apartment project in Dania Beach being developed by the Royal Palm Companies.

Trez Capital provides short-term debt and equity financing typically between six and 36 months in term, up to $100 million in loan value. In 2021, the company originated $3.9 billion in loan originations with $633 million sourced from the Eastern U.S. region that includes offices in Palm Beach, Florida and Atlanta, Georgia.