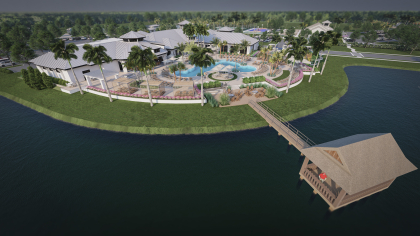 KW PROPERTY MANAGEMENT & CONSULTING, a premier Florida-based association management company, is increasingly being called on to apply its award-winning experience and best practices to luxury RV and motorcoach resort communities from the North Carolina mountains all the way down to the Florida coastline. In the latest example, KWPMC was retained to manage the Olde Florida Motorcoach Resort development on Florida’s West Coast near Fort Myers.

Olde Florida is the newest project from renowned Naples-based developer Jon Rubinton, who has more than three decades of experience and previously developed the nearby Mangrove Bay. Construction of Olde Florida is underway, and motorcoach enthusiasts will have opportunities to own or rent at the resort. Scheduled to open in early 2024, Olde Florida will boast a total of 444 motorcoach sites.

“The biggest shift we have seen in the segment is developers opting to highly amenitize these resorts – they are no longer simply RV parks,” Maribona said. “These are now destination lifestyle resorts, whether they are operated as for-profit resorts or as association communities. The demographics are also changing, as we now cater to a younger age group with different needs than the traditional RV enthusiast.”

That trend is especially evident at Yacht Haven, which attracts a wide range of guests including traveling nurses, digital nomads, young families and longer-term snowbird visitors. Yacht Haven Managing Sponsor Gary Cioffi and partner Christopher Hein have completed many luxurious renovations and upgrades since acquiring the 20-acre site in 2021, as part of a $26 million investment to position the resort as one of the nation’s premier motorcoach and yachting destinations.

Yacht Haven features 222 motorcoach sites, waterfront views and a marina that can accommodate vessels up to 150’.

KWPMC is one of the fastest-growing property management companies in the U.S., with over 80,000 homes under management and 2,000 employees. The company has developed its own digital platform and grown organically since inception.