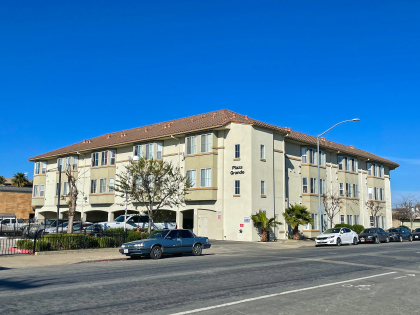 The Mogharebi Group (TMG) has arranged the $9.25 million sale of Plaza Grande, a 92-unit multifamily community in Salinas, CA. TMG represented the Monterey-based developer-owner of the fully occupied affordable housing community in its sale to a Los Angeles County-based private investor.

Built in 2003, Plaza Grande offers one-bedroom units ranging in size from 260 to 590 square feet. Renovations, including new flooring, cabinetry and vanities, have been made on a rolling basis. Located at 50 East Market St. in downtown Salinas, the three-story apartment community includes a gym, courtyard and picnic area with grills.

“Despite rising interest rates hampering the real estate capital markets, we were able to attract multiple interested buyers to Plaza Grande, ultimately topping $100,000 per unit in this sale,” said TMG Executive Vice President Otto Ozen, who along with Senior Investment Advisor Nazli Santana brokered the transaction. “The universal need for affordable housing, aided by Baby Boomer demographics and an even more robust overall renter economy, has created so much demand that the California Housing Partnership projects that 120,000 more affordable units will be needed each year by 2030.”

Even with the overall favorable multifamily supply and demand dynamics, Mogharebi had to overcome several obstacles in achieving a successful sale, including a limited Low-Income Housing Tax Credit (LIHTC) investor pool and the non-traditional unit sizes at Plaza Grande, according to Santana.

“We were able to demonstrate that as a LIHTC community, Plaza Grande offered extra investment appeal, such as a more stable tenant base and consistent, reliable government-backed rent payments,” said Santana.  “Also, landlords will likely benefit from reduced competition as more affordable housing properties participating in the 30-year LIHTC program become eligible for market-rate conversions or are removed from the rental market altogether. Finally, Plaza Grande is located in an Opportunity Zone, which offered considerable tax advantages to the buyer.”

The county seat and most populous city in Central California’s Monterey County, Salinas is only about 12 miles from the coast, an hour south of San Jose and an hour and 45 minutes south of San Francisco. Known as the “Salad Bowl of America”, Salinas and the surrounding rich farmland support a $2 billion agricultural industry that produces an abundance of fruit, vegetables and more. The city’s close proximity to Silicon Valley and a large number of agricultural employers have put it on the path to becoming the AgTech Capital of the nation.

The Mogharebi Group is one of the largest multifamily brokerage firms in the United States by volume. With offices throughout the western United States, The Mogharebi Group offers private investors and investment funds deep local market knowledge, an extensive global network of top real estate investors, state-of-the-art technology, and direct access to capital with over $800 million in regularly revolving inventory. For more information visit: http://www.Mogharebi.com.