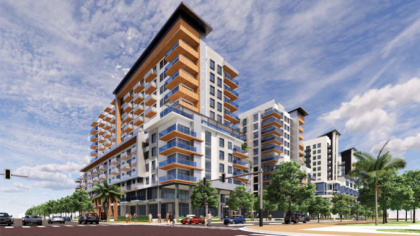 The 1.4-acre site was one of the last available assemblages in Flagler Village and is across the street from Peter Feldman Park. Buyer Midtown PAL Flagler Village LLC plans to build a 12-story, 252-unit rental project with a 300-space parking garage, expansive pool and amenity deck, open-air pedestrian plaza and ground-floor retail and restaurant space. Construction is expected to begin this year, with resident move-ins targeted for 2024.

Based in New Smyrna Beach, the buyer is a vertically integrated real estate investment and development company with a quarter-century track record of delivering high-quality projects.

Sturgis and Ross represented four different owners of the properties, which are located at the intersection of Sistrunk Boulevard and Northeast Third Avenue, in the sale to Midtown PAL Flagler Village.

“This complex transaction was made possible because of our creativity, strong relationships and extensive knowledge of the neighborhood,” Sturgis said. “We were able to expand on the original offering of nearly one acre to round out the site and allow the buyer to move forward with a premier multifamily development.”

Sturgis and the Native team have consistently generated notable investment sales and leasing transactions since the start of 2022.

Last month, the firm announced a number of recently completed office, retail and industrial sales throughout Broward County. Those deals followed a busy end of 2021 highlighted by Sturgis representing entrepreneur and #1 Wall Street Journal bestselling author Patrick Bet-David on his purchase of commercial buildings in Oakland Park and Fort Lauderdale for a combined $8.6 million. Bet-David’s media company, Valuetainment, is expected to base its new headquarters in Oakland Park.

Native recently relocated its corporate headquarters to a new Fort Lauderdale office that is double the size of its previous headquarters. The 4,000-square-foot office is located at 1926 E. Sunrise Blvd. in the city’s Victoria Park neighborhood.

About Native Realty: Founded in 2017 by pioneering Fort Lauderdale-based commercial real estate broker Jaime Sturgis, Native Realty is disrupting the real estate industry and redefining what it means to be a broker. Sturgis and his team of passionate brokers specialize in leasing and investment sales in the urban core and emerging markets in South Florida. Instead of looking at individual listings and transactions in a vacuum, Native takes a holistic approach to the urban neighborhoods the company’s brokers live, work and play in. The firm is best known for its role curating Fort Lauderdale’s Flagler Village neighborhood, completing more than 1 million square feet in transactions in the last few years. It is now expanding its placemaking efforts to urban core neighborhoods throughout South Florida. Native works with all types of clients, from Fortune 500 companies to small businesses. Notable clients have included Coca-Cola, Integra Realty Resources, U.S.A. Parking and many more. Native is headquartered at 1926 E. Sunrise Blvd. in Fort Lauderdale. For more information, visit www.nativerealty.com.