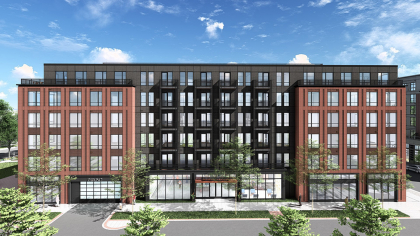 JLL Capital Markets announced today that it has arranged $37.308 million construction financing for the development of Kite House at The Parks at Walter Reed, a 109-unit condominium development with 11,000 rentable square feet of ground-floor retail in Washington, D.C.

JLL worked on behalf of the borrower, a joint venture between Hines, Urban Atlantic, and Triden Development Group, to secure the three-year, floating-rate loan through Bank OZK. Grosvenor Americas provided a mezzanine debt commitment of $21.1 million for Kite House through its Structured Development Finance program.

Kite House is located at the intersection of Georgia Ave. NW and Elder St. NW, in the northern sector of The Parks at Walter Reed master-planned community. The community will include 3.1 million square feet of mixed-use development across 66-acres. The community is a 10-minute walk to Rock Creek National Park and the Takoma Metro Station, additionally, the property is served by eight metrobus routes. The property is five miles from both downtown Washington, D.C. and downtown Bethesda and 1.5 miles from downtown Silver Spring. Additionally, the community is three miles from Capital Beltway (Interstate 495) offering direct access to the entire Washington, D.C. and Baltimore metropolitan region and rail connections such as Amtrak, MARC and VRE trains.

“With the closing of Kite House, the development team continues to build out the transformational Parks at Walter Reed project,” said Leachman.  “There was significant interest from the lending community with the recent success of the first condo project within The Parks at Walter Reed, The Brooks, as well as the proximity to the adjacent Whole Foods.”