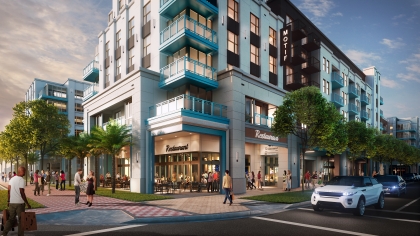 A longtime staple for deli enthusiasts in Weston, Mitch’s is set to open a 2,000-square-foot restaurant on the ground floor of Motif. ArchCo Residential and Bluerock Real Estate Holdings are building Motif at 500 N. Andrews Ave. The site of the 385-apartment project with nearly 25,000 square feet of retail and restaurant space spans a full block from North Andrews Avenue to Northeast First Avenue and from Northeast Sixth to Fifth streets.

Native is exclusively marketing the retail and restaurant space at Motif.

Financial terms of the Mitch’s lease were not disclosed.

A traditional New York-style deli owned by Mitch Shidolfsky, Mitch’s is known for its fresh bagels made on site, homemade salads, smoked fish shipped from Brooklyn and more.

“Mitch’s is sure to have a big following among residents of Motif and others who live, work and spend time in Flagler Village,” Sturgis said. “We are excited to secure this lease with the restaurant and look forward to announcing additional tenants at Motif soon.”

The North Phase of Motif is scheduled to be completed in January 2020, with the South Phase to follow in April 2020. Motif’s design includes a paseo that will connect North Andrews Avenue to Northeast First Avenue and double as an entertainment venue, with market stalls, outdoor restaurant seating, a 7,396-square-foot public plaza and courtyard.

Motif is an example of how prominent developers and investors who historically would have hired large national real estate brokerages to market their commercial projects are increasingly turning to Native in the Flagler Village area.

The latest transaction keeps the momentum going from a historic year for Native and Sturgis. The year began with the January 2019 milestone sales of The Hive and Flagler Uptown in Flagler Village, which set neighborhood records on both a price per building square foot and land square foot basis and was the culmination of Sturgis’ multi-year efforts successfully curating the properties with a vibrant mix of tenants.

On Oct. 30 in Miami, Sturgis was honored by Urban Land Institute (ULI) Southeast Florida/Caribbean as the 2019 Young Leader of the Year. Sturgis earned the prestigious award for his holistic approach to placemaking in Flagler Village and the other urban core neighborhoods he lives, works and plays in.

About Native Realty: Founded in 2017 by pioneering Fort Lauderdale-based commercial real estate broker Jaime Sturgis, Native Realty is disrupting the real estate industry and redefining what it means to be a broker. Sturgis and his team of passionate brokers specialize in leasing and investment sales in the urban core and emerging markets in South Florida. Instead of looking at individual listings and transactions in a vacuum, Native takes a holistic approach to the urban neighborhoods the company’s brokers live, work and play in. The firm is best known for its role curating Fort Lauderdale’s Flagler Village neighborhood, completing more than 600,000 square feet in transactions in the last few years. It is now expanding its placemaking efforts to urban core neighborhoods throughout South Florida. Native works with all types of clients, from Fortune 500 companies to small businesses. Notable clients have included Coca-Cola, Integra Realty Resources, U.S.A. Parking and many more. Native is headquartered in the heart of Flagler Village at 719 NE Second Ave. For more information, visit www.nativere.com.