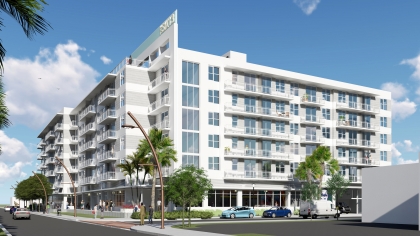 Native Realty is involved with about 10 Opportunity Zone sites in the city, including The Six13

The Six13 – named after its 613 NW Third Ave. address – has generated significant attention due to the project’s location within an Opportunity Zone and the attainable rent structure proposed for the 142 apartments. Sturgis is marketing the ground-floor restaurant space, which includes 3,424 square feet of interior space and 576 square feet of outdoor seating. Affiliated is scheduled to complete the project in June 2020.

Including The Six13, Native is working with owners and developers of about 10 Opportunity Zone sites in Fort Lauderdale’s emerging urban neighborhoods.

“The momentum created by Flagler Village is expanding west to Sistrunk, which is quickly becoming the new frontier for investors and developers,” Sturgis said. “We are proud to work with Jeff Burns and the rest of the Affiliated team on such an impactful project for the city and neighborhood. The Opportunity Zone program makes The Six13 that much more enticing for potential commercial tenants.”

Affiliated is also incorporating a co-working space available to The Six13’s residents on the ground floor next to the restaurant space. The project is a short walk from the city’s Virgin Trains USA station, connecting Fort Lauderdale to Miami and West Palm Beach via passenger trains.

For Sturgis, the latest assignment continues a banner year that began with the January 2019 milestone sales of The Hive and Flagler Uptown in Flagler Village. The $13.25 million sale of the mixed-use buildings set neighborhood records on both a price per building square foot and land square foot basis and was the culmination of Sturgis’ multi-year efforts successfully curating the properties with a vibrant mix of tenants.

On Sept. 5 in Miami, Sturgis will be honored by Urban Land Institute (ULI) Southeast Florida/Caribbean as the 2019 Young Leader of the Year. Sturgis earned the prestigious award for his holistic approach to placemaking in Flagler Village and the other urban core neighborhoods he lives, works and plays in.